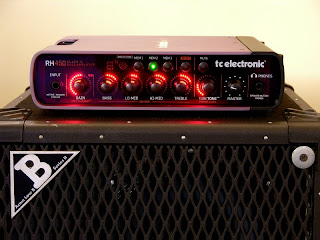 Nothing reminds me of my advancing years more than loading my gear out and back for a gig. You'll find a lot of very heavy equipment listed on these pages and I have been guilty of always taking more power than I need, so I started my search for a proper compromise between size and weight. Very recently one of my bass-playing friends (hi KJung) suggested I take a look at the TC Electronic RH450, otherwise known as the Rebel head.

After reading a variety of reviews on TalkBass, I decided to take the plunge and a few days later my new RH450 arrived. Before I dig into what I found, here are the main features:

I liked the idea of a lightweight amp that could not only perform most of the functions of my Millennia/Crest combination, albeit with less power, but also shave nearly 100 pounds off of the carrying weight off of my rig. It all seemed to good to be true.

While there is something to be said for having the massive headroom of a lead sled (hugely powerful, heavy poweramp), the Rebel head delivers on its promises and more. Where I expected to compromise, the RH450 not only exceeded my expectations, but proved far more capable than expected, at the expense of headroom that I wasn't using.

Initially I dialed in the RH450 EQ totally flat with the compressor and TubeTone off. Set up this way the RH450 was certainly flat but did not seem to have a large amount of power at first. Time to twiddle the knobs. That's when the unexpected magic happened.

Firstly, I discovered that I had inadvertently zeroed the volume level on the patch I was using. That's certainly a "gotcha" so a quick review of the manual is useful before you dive in.

Setting the compressor up a hair and adding a bit of tube yielded some very interesting effects. The amp became more agressive and reactive in true tube amp fashion, a bit like turning up the "drive" control on an EBS Fafner. The volume levels I had expected were right there! No problem whatsoever. That's with a single 4ohm Acme B2. Clearly I needed to experiment some more.

Now it's time to tweak the tone controls which will hopefully yield something a bit more to my liking... After a few adjustments I noticed that the amp was starting to sound quite a bit like my Trace V8. Whoa! After a bit of refinement there it was! Okay, what else can it do? How about an old SWR SM400 with a Goliath? Adjust a bit of mid-range scoop, some tweaking and voila! Well, then I wondered if it could sound like an old SVT? Yes (more than close enough for rock'n'roll). Amazing! Now I get it. The tube amp emulation works extremely well. But can it get a clean solid state/hi-fi sound like the Millennia/Crest? You bet. To get into the same ballpark as most of the amps I've mentioned is very easy and the more time you invest, the more refined these "emulations" are. For me this was totally unexpected.

Perhaps the real "magic" here is due to the versatile tone controls with center frequencies that are individually adjustable. These controls are a lot more "accessible" to the musician than many other amps I've tried. I guess the short story is that the amp makes it easy to tweak the tone you want precisely, without need of a studio engineering degree.

Review? As mentioned, the controls are so accessible and intuitive that the RH450 just invites you to play. Plenty of power is present which suggests this amp is actually rated conservatively. The tuner is very quick to use and accurate using my StroboStomp and Korg DTR2000 for validation. The compressor is very well-designed, sounds musical and is useful. The tube sim is the best I have used or heard. Solid well-designed armor casing provides excellent cooling although the amp does not seem to run too warm even at high levels. I didn't even realize that there was a fan in the amp, it is that silent. Featherweight. Footswitch recommended for maximum fun.

I'm starting to question why someone would carry hundreds of pounds of unnecessary amplifier gear to a stage where PA support is provided, as with most venues these days. The RH450 really shines in a live situation. Actually, it does the job extremely well even when PA support is not available. 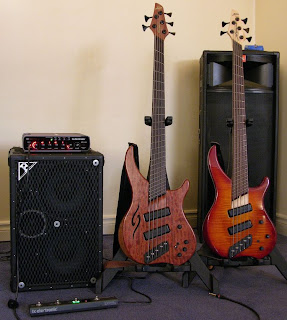 * Refer to the post on TC Electronics power ratings.
Posted by Basses at 11:26 AM